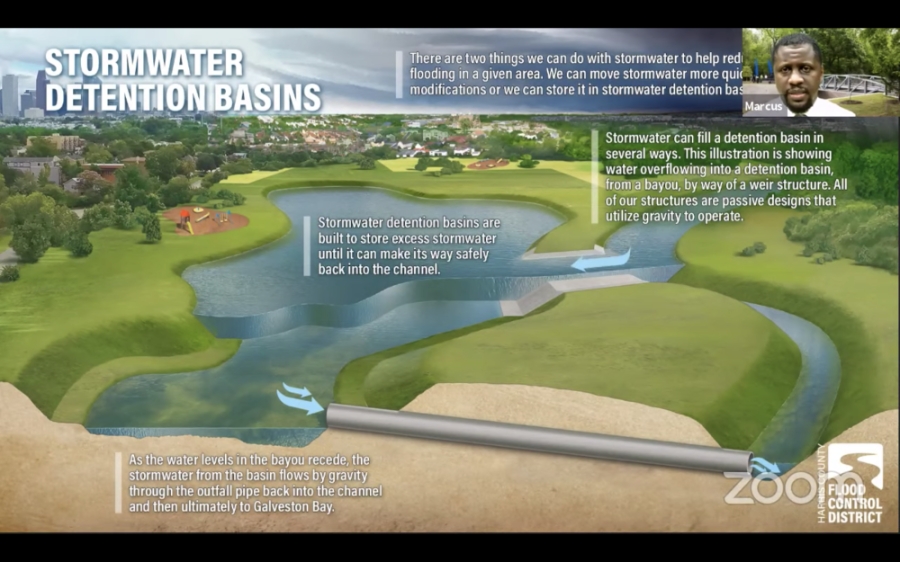 During a virtual public meeting June 24, HCFCD Engineering Director Marcus Stuckett said the district has completed a draft preliminary engineering report for a project targeting the area and is seeking public input about the plans.

The specific project area is bordered by Peek Road on the west, Lakes of Bridgewater on the east, Clay Road on the south and Stockdick School Road on the north, Stuckett said. South Mayde Creek, which flows into the Addicks Reservoir near Greenhouse Road, has a history of flooding in this area with structures inundated during past hurricanes and floods, according to the district.

A feasibility study conducted in 2017 identified stormwater detention basins—essentially ponds that take in water doing heavy storm events and hold that water until the receiving stream starts to recede, Stuckett explained—as one of the recommendations for the creek.

“A stormwater detention basin is just one of the tools that we have in the toolbox to be able to create flood-damage-reduction projects,” Stuckett said.

Thus, the flood control district plans to construct a network of stormwater detention basins in the area that will provide additional stormwater storage capacity in the region.

The district has proposed a wet-bottom design for three basins, all of which are directly adjacent to South Mayde Creek and will allow excess floodwaters to flow into the basins through reinforced concrete pipes.

“The long-term goal is to increase the capacity and alleviate flooding in this segment of South Mayde Creek,” Stuckett said.

Currently, the project has a price tag estimated at $12 million, Stuckett said. About $9.4 million in local funds for this project will come from the $2.5 billion flood bond Harris County voters passed in August 2018, and during the final stage of design, the flood control district will continue to seek additional funding to support the remaining costs.

Residents can visit www.hcfcd.org/C48 to learn more, ask questions or comment on the project. The comment period is open from June 25 to July 9.