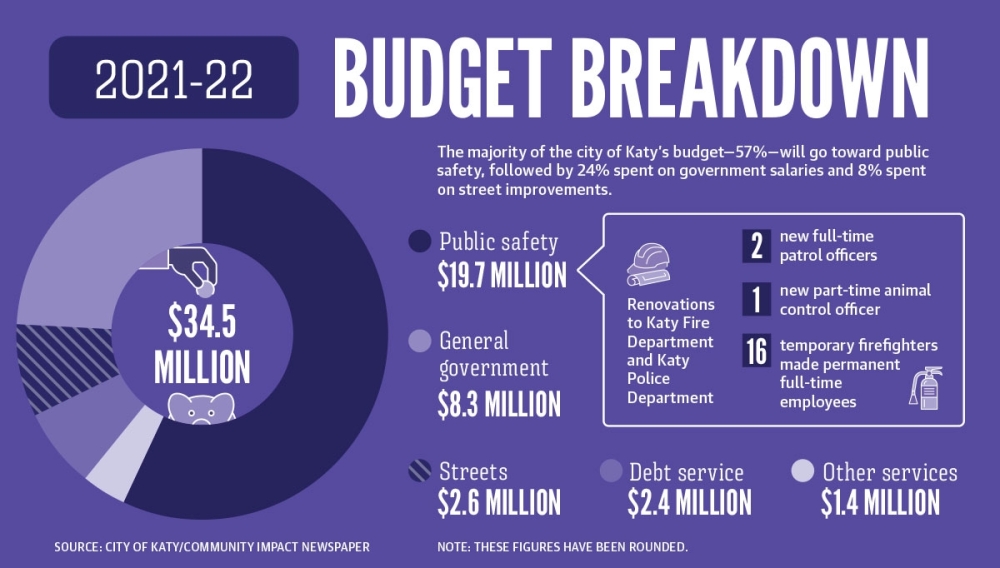 Council Member Dan Smith said at the Sept. 27 meeting the city of Katy has distinguished itself from other Texas cities in the budget approval process by maintaining a balanced budget and by not increasing the property tax rate. In comparison, Brookshire and Fulshear increased their respective property tax rates to $0.6522 and $0.20707 this year, according to each city’s FY 2021-22 budget.

"The past months have brought money to many cities across our state that have not been well managed,” Smith said. “Katy, on the other hand, has a balanced budget and addresses many of the things that residents have told me are most important to them.”

Most of the city’s expenses next year will go toward public safety, which represents 57% of the total budget, according to a Sept. 2 workshop presentation. One public safety initiative in 2022 involves making 16 temporary Katy firefighters, who were hired three years ago using federal funds, permanent employees. The city will also add two new police officer roles and five new firefighter positions.

In addition to adding police and fire department employees, the city will add one part-time animal control employee at the recommendation of an animal control advisory group created in February.

After public safety, the next largest share of the budget will go toward general government expenses with 24%, followed by streets with 8%.

The city also plans to expand the sewer treatment plant and work on a hike and bike trail that leads to downtown Katy, according to Harris.

Katy officials are also working on drainage projects in the Hunters Terrace neighborhood; on Fortuna Drive and Pecan Lane; on outfall channels, which are structures that allow the outflow of collected water into detentions; and at the flood detention basin near Pitts Road, officials said. The city will spend $50,000 on street drainage projects, according to the budget.

Additionally, city officials are working to bring forward Katy’s first five-year capital improvement plan, which will include any new projects or purchases the city plans to undertake, such as street improvements or purchasing new vehicles, according to Vasquez. The publicly available plan, which will be uploaded to the website within the first half of 2022, will allow citizens to see the city’s long-term plans and what budgets for future years may include.

“This is a living document, so as soon as we identify a need, we can put it in this plan,” Vasquez said.

While the city’s property tax rate remained the same year over year, the amount of property taxes residents pay will rise due to increased property values. Average homestead values in the city of Katy increased from $274,507 in 2020 to $291,434 in 2021, according to city documents, resulting in an 6.2% increase in tax revenue despite the rate remaining the same.

Texas law requires cities to limit their property tax revenue growth to 3.5% annually, unless voters approve otherwise. This is down from the previous 8% growth rate in place since 1979, according to the Texas Comptroller’s office. Katy’s property tax rate was $0.48 in FY 2019-20—higher than the $0.447168 rate for the last two fiscal years.

Vasquez said the city has not had a problem with keeping the growth rate at 3.5% and maintaining the property tax rate.

“[For] a small city like us, 8% isn’t that much. We still have to be careful with it,” he said. “The leaders of this town [have] controlled the growth in the amount of money we spend, and they’ve done a fantastic job.”

The Katy Development Authority, which is funded by the city and outside sources, expects to receive $700,000 this year from the city after receiving no city funds for the past two years, according to the budget.

The city expects to see new development revenue in the coming year, some of which will come from new construction in 2022 at the Katy Boardwalk, a multiuse development near Katy Mills.

Keith Dalton of KBH Venture, co-developer of the Katy Boardwalk District, said although construction has not started yet due to the pandemic, he expects the district’s hotel and conference center—set to begin in 2022—will create value.

“I think that a high-quality hotel and conference center drives economic development activity beyond measure in communities like this,” Dalton said. “If you’re looking to locate your business or your industry in a certain part of Texas, then you certainly want to be at a place where others can come and promote business and meetings at a high-quality conference center and affiliate upscale hotel.” 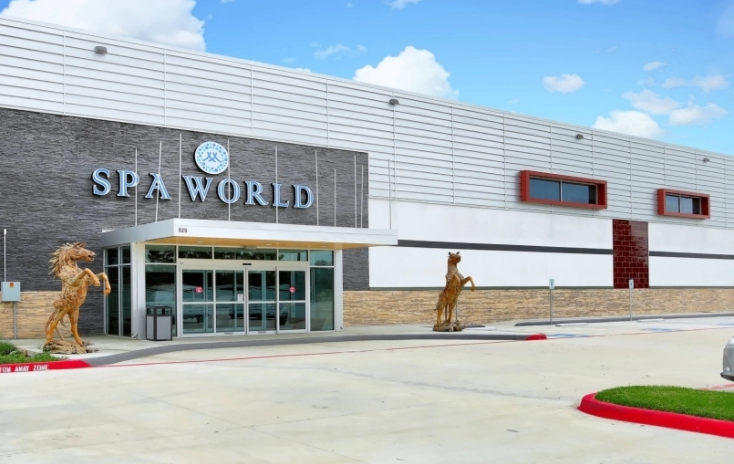 Nov 1 2021
By: Laura Aebi - Community Impact Since it opened in September 2020, Spa World has been attracting visitors from all over the state, said Phillip Phan, Spa World’s sales and events manager. As the first Korean spa in the Katy-area, Spa World offers many traditional services, such as saunas and bod...Continue Reading

Oct 28 2021
By: Taylor Williams - Rebusiness Online KATY, TEXAS — EastGroup Properties, a Mississippi-based REIT, has broken ground on Grand West Crossing 1, a 120,600-square-foot industrial project in the western Houston suburb of Katy. The building, which will be situated within a larger Grand West Crossing master-planned development, will feature 28-foot clea...Continue Reading