A look inside the new Urban Air Adventure Park in Katy 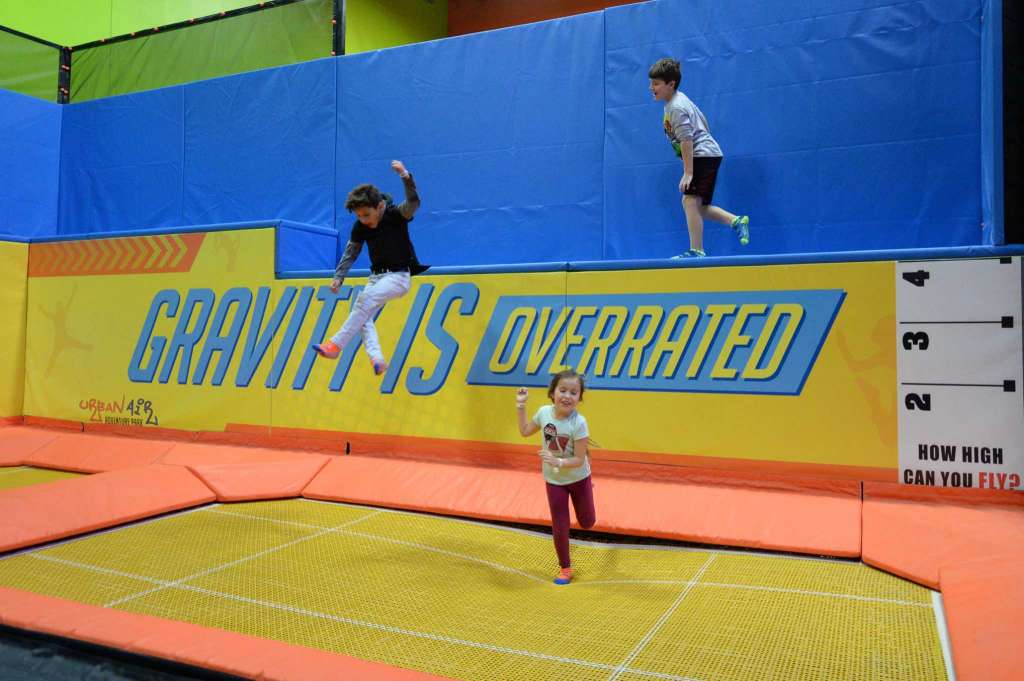 The Urban Air facility features a two-story, 31,000 square-foot indoor play area. The park has 16 unique attractions. There are multiple trampoline zones with features like trampoline dodgeball and trampoline basketball. Tubes Playground is a winding maze of tunnels and slides perfect for smaller children.

The Sky Rider Coaster is a zip line that hurtles patrons across the park high above the action. In the Ropes Course, customers hooked into a harness try to make their way through a second-story obstacle course. The Pro Zone is a trampoline feature for expert jumpers. “It’s one of our most challenging features,” said Urban Air manager Darian Molina. “It’s so fun, though. You won’t believe how high you can bounce.”

Wipeout is a popular attraction in which a machine rotates two beams of different heights in a circle. Bouncers have to jump or duck at the right moment to avoid being smacked with a beam. The Warrior Course is an obstacle course with swinging ropes and climbing bars over a ball pit.

“It’s like something you would see on Ninja Warrior,” Molina explained. The Battle Beam is a no-holds-barred battle involving soft — but solid — beams. Combatters use the beams to try to knock one another off a platform.

The facility also offers nine private party rooms and 10 private tables for birthdays, corporate events and other celebrations. The Urban Air cafe offers a variety of entrees like pizza, hamburgers, and chicken wings. The cafe also has gluten-free food options like cauliflower pizza for customers with allergies.

According to Urban Air manager Nathan Renaud, birthdays at Urban Air take all the stress out of party planning.

“We set up. We clean up. You get a designated party host, and they take care of everything,” he said.

Renaud emphasized that the park offers a high staff to jumper ratio in order to ensure the safety of guests.

“Everywhere you look, you’ll see a bright orange shirt. Those are our court monitors, and their main job is to watch your kids,” he said. “Safety is our top priority.”

Renaud said that the adventure park is as much a destination for parents to relax as it is for kids to have fun. “The parents are allowed on all our attractions, but we find that parents really love that they can come here and relax while their kids play.”

For an added element of adult relaxation, Urban Air has massage chairs and sells beer and wine to adults.

“This is a place where we want you to kick back and have fun and just watch your kids being watched by us,” he said. “You can relax knowing your kids are safe and having a great time.”

Urban Air also has free wi-fi for customers. Molina said that busy parents are always encouraged to bring their work with them while their kids play.

“(Parents) bring their laptops. They bring their papers. They spread it all out and have their own little office here,” she laughed. “They put their headphones on, get in the zone, because every time that they look up, they see their kid, give them a thumbs up, and know that everything's good.”

Urban Air was originally slated to open in 2018, but according to Urban Air owner Jennifer Sieracki, the opening was repeatedly pushed back due to setbacks resulting from a contractor that took their money but did not complete the project.

“This is a project that’s been two years in the making,” said Renaud. “We’ve had so many anxious parents wanting to know when we were going to open, because there was so much community excitement. Now we’re thrilled that we’re finally open and get to see all these smiling faces.”