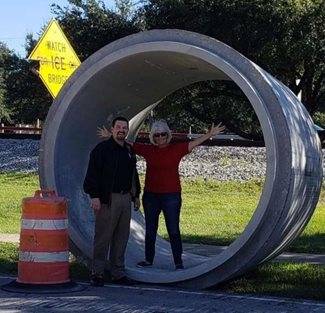 Several of the approximately 30 residents at the meeting asked what would happen after the project is completed if another Harvey visits the area.

David Leyendecker, the city engineer, said the project capacity is designed for a 100-year storm. After Harvey, the National Oceanic and Atmospheric Administration set newer standards for rainfall amounts within a 24-hour period to define a 100-year event. The NOAA chart shows 16 inches within a 24-hour period. In 2017 — when Hurricane Harvey occurred — that rainfall total was 12.4 inches in 24 hours.

Leyendecker said Harvey was more like a 500-year event. “There’s only so much you can do, it (flooding) can still happen.” According to Costello, the contract engineer hired by the city, 685 Katy-area homes flooded after Hurricane Harvey. Harvey did impact the First Street project.

City officials authorized larger storm sewers after Hurricane Harvey. “We’re putting in a much larger storm sewer because so many houses flooded just north of First Street,” explained Leyendecker in a September interview.

He detailed the First Street project to residents and added that the city also is working to expand detention at Pitts Road, where the city hopes to build another detention pond.

After the meeting, which was attended by Katy City Council, Councilman at Large Chris Harris explained that the bottom line is to increase the capacity to hold water with both the Pitts Road detention and with the upgraded First Street storm sewers. Both Harris and Leyendecker emphasized that whatever measures Katy takes cannot adversely impact those living south of the city.

The First Street project encountered a delay because of the need for CenterPoint to relocate a gas line, said Leyendecker, but work started this month and could take a year to complete.

City Council awarded a construction contract in late August to Trans-Tex Construction of Pattison. The $3,857,299 contract was the lowest of three bids submitted for the project, according to city officials. Total project cost is $4,461,728, which includes engineering, surveying, inspection and a drainage study. Leyendecker said the First Street project is funded from the Metro sales tax that the Katy Development Authority receives for mobility projects. Katy receives revenue from a half-cent of the 1-cent sales tax collected by the Metropolitan Transit Authority within its boundaries.

Brad Munsell, president of TransTex, outlined for residents a four-phase traffic control plan, which would impact some access to the neighborhood. “We’re trying to work closely with CenterPoint,” said Munsell, who said the project’s end result will be a street that looks a lot better and drains a lot better.

In addition to larger storm sewers, Leyendecker said the project will include storm inlets at each intersection off First Street. The two-lane asphalt road will become a three-lane concrete road with a dedicated left-turn lane, from Bartlett west to near Cane Island Parkway. A five-foot sidewalk will run from Cane Island along the south side of First Street to Bartlett and the roadside ditch will be filled in.

Leyendecker added that construction of a third reservoir to handle Cypress Creek overflow also is key to flood mitigation in the Katy area. That is a federal project that has won support of District 10 U.S. Rep. Michael McCaul, R-Austin, and Houston and county officials. 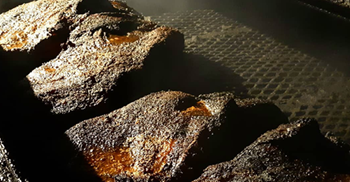 Nov 8 2018
Katy ISD has officially enrolled 80,000 students across its many campuses. The 80,000th student enrolled at Davidson Elementary School, and the district will celebrate Nov. 9 with a welcome party attended by board of trustee members, superintendents and school administrators, according to a press release. “Expecting to end the year with a...Continue Reading