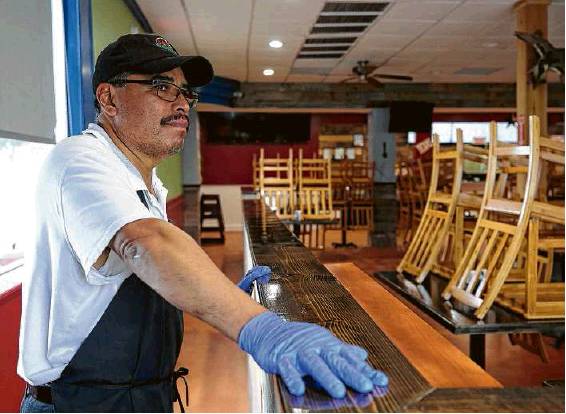 Gerardo Torres poured his savings into opening the Mesquite Grill, his first restaurant, after decades as a busboy and waiter.

Torres and his two partners held a grand opening on Feb. 29 for the Tex-Mex eatery off NASA Parkway, which did brisk business for two weeks. Then the unthinkable happened: Harris County on March 17 restricted restaurants to takeout and delivery to prevent the spread of the novel coronavirus in crowded dining rooms.

“It was like a nightmare,” Torres said. “We saw the (order) come down and it was like, ‘Oh, we never expected this.’ ”

The Mesquite Grill’s receipts plummeted by 75 percent, Torres said. He said without an infusion of cash, the trio will have to close the restaurant by the end of April.

Torres hopes Harris County can provide that lifeline. Commissioners Court is poised to approve a $10 million fund on Tuesday for no-interest, forgivable loans of up to $25,000 to small businesses harmed by the pandemic.

Precinct 2 Commissioner Adrian Garcia, who proposed the program, said he hopes Harris County will more quickly be able to provide aid than the federal government. Since Friday, hundreds of thousands of small businesses have applied for loans funded by the stimulus package approved by Congress in March, and banks have struggled to handle the volume of requests.

Garcia said if approved by Commissioners Court on Tuesday, the program will go live Wednesday and cut checks to businesses within 30 days.

“That’s how fast people can start applying for it and getting the money that they need almost immediately,” Garcia said. “I want this to be a shot in the arm.”

Forty-one percent of Greater Houston Partnership member businesses with 500 or fewer employees said they could survive the coronavirus slowdown for four weeks or less, a survey by the nonprofit said. A third reported reducing their workforce.

Several business groups and chambers of commerce have signed up to speak in favor of the loan program at Tuesday’s virtual Commissioners Court session.

Garcia said he modeled the proposal after a similar program for small businesses affected by transportation projects he helped create as a Houston city councilman. To be eligible, businesses must have existed for at least one year, be in Harris County and in good standing with the tax assessor, have a net worth of less than $15 million and annual average net income of less than $5 million over the past two years, he said. Sexually oriented businesses and liquor stores are excluded.

Firms can borrow up to $25,000, which can be forgiven through county tax breaks over five years. The funds may be used only for certain purposes, including payroll and day-to-day expenses. If the borrower violates those conditions, the business would become ineligible for loan forgiveness and would begin repayment following athree-month grace period.

The criteria make no distinction between firms classified as essential or nonessential under the stay-at-home order, though businesses must demonstrate they have been harmed by the pandemic. The program, which will be administered by the Houston-Galveston Area Council, will award loans on a first-come, first-served basis.

Garcia said he would seek to expand the program if the initial $10 million tranche is exhausted quickly and urged the city of Houston to contribute. Mayor Sylvester Turner said Monday he would consider the idea.

Adriana Gonzalez, president of Camara de Empresarios Latinos de Houston, said some local businesses need Harris County’s program because they are less likely to receive federal loans. Since the federal small-business loan program gives preference to firms that have existed for more than two years and have high credit scores, she said the county program would be attractive to newer companies.

“Some of the small spas, small beauty salons, the restaurants that opened a year ago — those are the ones that are really going to benefit,” she said. “And the self-employed, the painters and the plumbers and the construction side.”

The Mesquite Grill is eligible for a county loan because Torres and his partners, Enrique and Alex Torres, incorporated the business in April 2019. He said a loan from the county would help pay vendors and their nine remaining employees.

“Otherwise, we’re just going to have to leave the place,” Torres said.

Construction is classified as an essential industry, though Remodel HTX owner Eddie Mendoza said many clients have postponed jobs, fearful of having workers in their homes.

Eighty percent of Mendoza’s business is residential, and he is struggling to find enough work for his 10 employees. Mendoza said he is considering a county loan after hearing about the program through the Houston Hispanic Chamber of Commerce.

“A loan would help us with payroll and any overhead to keep on running,” he said. “We’re trying to avoid laying people off.”

Leo Coronel, chef and owner of Near Northside Italian restaurant Rocco’s, said he has done his best to shift the business to takeout. Loyal customers have helped Coronel keep about two-thirds of his normal volume, though he said he may still need help. Aid from the federal Small Business Administration, he worries, may take too long to arrive.

“SBA, they’re saying, could take months to roll out this money for businesses,” Rocco said. “If business doesn’t go back to normal soon, I don’t think a lot of us have months.”

Mar 27 2020
The impact of COVID-19 on Katy area businesses has prompted the Katy Area Economic Development Council to partner with Katy area banks to reinstate a Business Recovery Loan program which was implemented during Hurricane Harvey. “For the COVID-19 Loan Program, TDECU is participating to provide low-interest loans to help impacted businesses respondin...Continue Reading